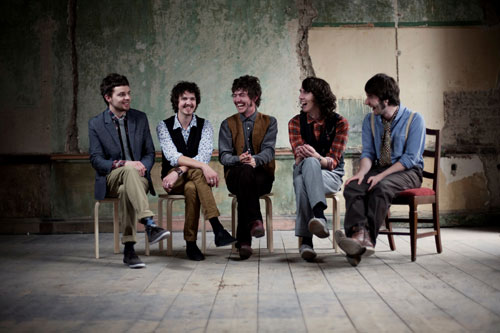 This is five guys that have been playing together for a decade, learned and practice their craft, developed their own style and became O Emperor. I personally believe that their latest album is very well produced and has great depth and dimension. On my first listen, I wasn’t sure but then I heard their song “All Worked Out” and I was won over. Their vocal harmonies, the plucking guitars, the piano throughout has definitely brought their talent forward. Don Quixote song is a great favorite among people.

What was your reaction when you found out you were going to showcase at SXSW?
We were incredibly excited, we had actually nearly forgot about the deadline to apply, but a friend from Texas reminded me, we’re very grateful they did. To play there will be amazing, I’ve followed the festival as a fan for the last few years on the net, it always introduces me to so many great new bands.

We know how difficult it is for a band to get a record deal by a major label and yet you did it. More bands want to be independent, be in control but not all. What would you say to the bands that want a record deal in today’s music industry?
We made the album ourselves before we were signed and then managed to licence it to Universal Ireland, so we still see ourselves as an indie outfit. We certainly approached the album as just are own thing, with no real expectations, it was just us producing and controlling it. We’re not signed anywhere outside of Ireland so the “Major label” benefits ain’t exactly bestowed to us, were still very poor musicians! I think we’ll continue to operate like an indie band; make records and license them to different labels in different regions.

For other bands, most definitely if you can, go record and make a record yourselves. Major or Indie label are all the same these days because they’re both as broke as each other and struggle the same way to break acts in a changing industry. If you have the record made then you can search for a label who likes your record for what it is. With the internet it’s much easier to promote your music with or without a label.

Music blogs are in the race to find the next big thing. Some people would say it might be the downfall for inexperienced bands as they are put under pressure when they aren’t really well practiced – too much love too quickly. What do you think about that?
Ya I think its a great thing to be talked about and get your profile above the thousands of other bands out there but it can certainly be premature. What follows a wave of hype generally comes a backlash or let down. People can hear about a band through various hype and come to them with a cynical attitude or too high an expectation which isn’t good. A true mark of a great band is one that can weather the storm of hype and continue to produce great music after its died down.

What part, if any, has social media played in the progress of your career?
It’s been very useful in gaining fans abroad, especially when your stuff isn’t released in certain regions. It’s brilliant to have your material out there for anyone that happens to hear about you. Its also crucial for us when were touring in UK or Europe to advertise gigs.

Three words to describe each one of you.
Cynical, inarticulate and boorish sums up all of us I think.